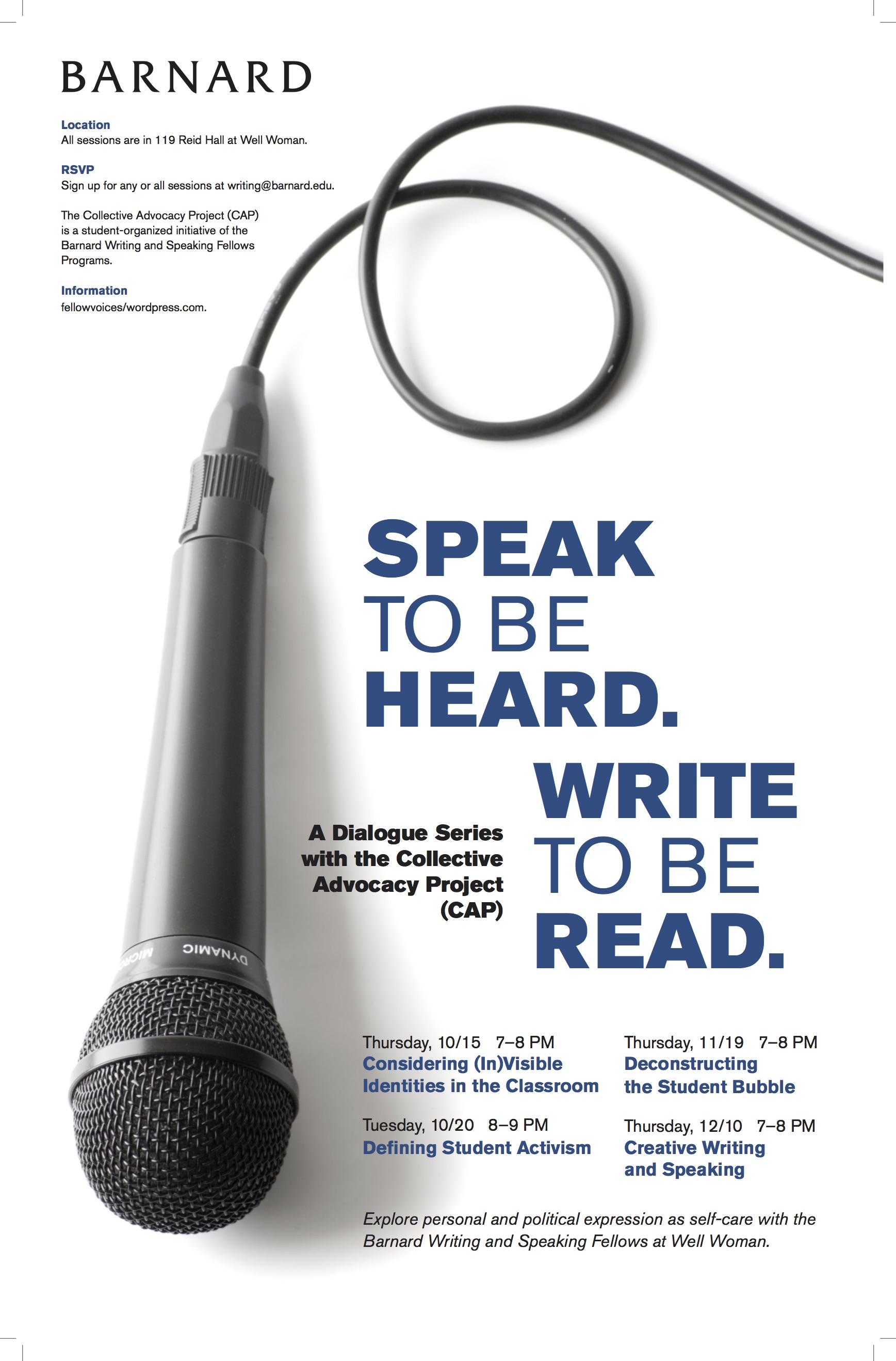 Our Mission in Practice

We believe that all communication pedagogy has political underpinnings. As students dedicated to creating equality and countering oppression in the world as part of our education, it is our responsibility to spread awareness about advocacy as part of our work within the Barnard College Writing and Speaking Programs. Thus, at times, CAP members may also act as communication consultants to fellow students pursuing activist causes. CAP members can and will workshop the writing and speaking of student activists. These consultations could be on projects such as, but not limited to, the following: fellowing an op-ed for the Spectator or a letter to a fellow activist group, workshopping a speech for a rally or a meeting with an administrator.

In the fall of 2014, a group of upperclass Fellows—at this point several semesters removed from their Writing and Speaking Fellow “training” courses—wished to revisit the radical communication pedagogical theories that ground their Programs. They met for a theory discussion group, led and organized by Writing Program Director Professor Pam Cobrin. The subject of their conversation was a journal article by Jennifer S. Simpson titled “Communication Activism Pedagogy” (in Teaching Communication Activism, ed. Lawrence R. Frey and David L. Palmer, Hampton Press, 2014). From the very start, CAP’s project has been to expand the intrinsic radical vision of the Writing and Speaking Fellows Programs and more directly apply it to the social justice issues on our campus.

In 2015 CAP became a grant-funded project of the Barnard College Writing and Speaking Programs and consists of a rotating cast of both Writing and Speaking Fellows. The project is student run and includes weekly meetings, but it receives advisory, administrative, and institutional support from Writing Program Director Pam Cobrin and Program Administrator DaMonique Ballou. For us, CAP stands for the Collective Advocacy Project, but it is also the acronym for the radical communication activism pedagogy.

action that attempts to make a positive difference in situations where people’s lives are affected by oppression, domination, discrimination, racism, conflict, and other forms of cultural struggle due to differences in race, ethnicity, class, religion, sexual orientation, and other identity markers. (p. 146)

These structures for approaching the discipline of communication direct the projects taken on by CAP– each project will seek to empower individual advocacy and in particular the activism of female students in the university landscape.

The members of CAP are not committed to any particular strand of activism or activist cause. The aim of CAP is not to either promote or devalue any causes or ideas, rather CAP aims to offer unique spaces that might not otherwise be available within the University for all students of the Columbia/Barnard community to be heard and seen. The long term goals of CAP are constantly evolving, but they will always include promoting the radical nature of writing and speaking pedagogies and facilitating activism in its many forms. We aim to be the most objective facilitators that we can possibly be, and we strive to focus on projects that particularly affect the Barnard student population.

In the 2015-2016 school year, CAP organized peer-led campus spaces for students, both independently and in collaboration with campus institutions such as Well Woman and the Office of Student Life, to record in writing or through speech their responses to their social experiences on campus and political movements—for example, #BlackLivesMatter—responses which can be displayed on campus to raise the social presence of student voices. In the spring of 2016, CAP organized an exhibit on trigger warnings. We collected responses from students and professors and showcased them in an interactive exhibit that invited the rest of the Barnard community to add their voice.

In the Fall of 2016, CAP created spaces for students to react to the aftermath of the 2016 presidential election. CAP created an interactive exhibit, inspired by the Subway Therapy piece in the Union Square station, in which students were asked to respond on post-it notes to questions about how they are doing, what they need, and where they can go from here. Additionally, CAP hosted a speaker series, Tethered to the Past, in which we invited professors to lecture about an area of their expertise and address what we can learn from this topic today in light of the current controversial political climate.

In Spring 2017, CAP interviewed Barnard students on the College's presidential search, and compiled their peers' opinions on who should serve as Barnard's next President in the video.

From Fall 2017 to Spring 2018, CAP interviewed students, professors, administrators and Barnard staff about their thoughts on Free Speech, a project which culminated in an installation in the mail room. They also launched Barnard's first literary journal on communication, [sic.],the first installment of which can be found here. Stay tuned for future opportunities to submit to [sic.].

Please contact CAP at collectiveadvocacy@gmail.com if you have any questions, or think that your group would benefit from a collaboration with CAP.